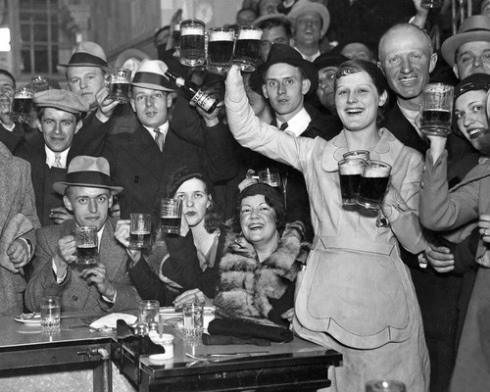 On January 16th 1919, Prohibition was instituted with ratification of the 18th Amendment to the States Constitution.  Its primary objection was to prohibit the “…manufacture, sale, or transportation of intoxicating liquors within, the importation thereof into, or the exportation thereof from the United States…”  Congress enforced this law by passing the “Volstead Act” on October 28, of the same year and the legislation was enforced one year later to the day.  Major influences in its induction were evangelical Protestant churches, (Methodists, Baptists, Presbyterians, Disciples and Congregationalists), Womens Christian Temperance Union (WCTU), and the Anti Saloon League (first world war prohibition, political corruption of saloons, reduce domestic violence at home).

Although alcohol consumption did initially decline, there was a dramatic rise in organized crime that fuelled the demand for good and bad alcohol alike.  Since the twenties were a boom economic period there were innovative ways around prohibition and money was in abundance as were, the lack of morals.  Casting aside the restrictions and sorrow concordant with the first world war a very Carpe Diem attitude was developed which gave rise to innovative and experimental music, dress styles and inventions which, although synonymous with the roaring 20’s are still with us today.

Even though jazz music had been around since the 1890’s it had been largely localized (New Orleans, Memphis, St Louis & other southern cities) as ragtime.   Social barriers had crumbled during the Great War and new values were transported with returning dough boys from a newly liberated Europe.  The jazz age took off in lively illegal venues of an era when popular music included current dance and novelty songs, and show tunes.   Due to its denigrating disregard for social conformity and physical proximity jazz started to get a reputation as being immoral promoting the new decadent values of the 1920’s.

The slang use of the word describing a “young woman”, supposedly refers to a young bird flapping its wings while learning to fly, although earlier references are abundant in use with prostitution.  Origins are most likely found in Paris during the socially and politically turbulent period of Liberalism during and after WW1.  During the 1920s the term applied to a “new breed” of young woman who wore short skirts, bobbed hair, listened to Jazz music, and flaunted their disdain for socially acceptable behavior.  Flappers were considered brash for their smoking, drinking, immoral sexual proclivity, wearing excessive makeup and the provocative flapper dress.

The term first appeared in 1920, in reference to the poor-quality alcohol that was being made, but not because it was made in a bath.  Gin was the predominant drink of the 20’s and, as a result, many variations were created by mixing cheap alcohol with water, extracts and flavorings (juniper berry juice and glycerin).  The term refers to the fact that the usual tall bottle could not be filled up using a sink tap but, rather had to use the bath tap, as well as sometimes distilled from and fermented in a bathtub.

Many other cocktails owe their existence to bathtub gin, as they were also created in order to mask its awful taste. Concoctions such as the Barbary Coast were born from desperation (scotch and gin) during Prohibition, along with the Colony cocktail (for the rich) and the Bees knees are prime examples of results from the cocktail shaker.

The Speakeasy (AKA Blind Pig):

Supposedly the term “speakeasy” originated in Pennsylvania during the 1880’s as a result of the Brooks High-License Act , decreasing the number of licensed bars but causing an increase in illegally operated ones.  Kate Hester, who ran a saloon for years outside of Pittsburgh refused to pay the new license fee and wanted to keep from drawing attention to her illegal business.  When her customers got too rowdy, she would hush them by whispering, “Speak easy, boys! Speak Easy!”

The more popular theory (albeit incorrect) is that during prohibition barkeeps would encourage the ordering of illicit liquids in his establishment by patrons in a hushed or speak easy volume, especially since many saloons were underground.

The Blind Pig name supposedly comes from a slang term used to refer to police officers who had been bribed to ignore illegal establishments in the days of prohibition.

During this era, it was common for rumrunner captains to water down alcohol or re-label bottles in order to increase profits.  One American rumrunner captain and boat builder, William S Mc Coy, became famous for never watering his booze, selling only the best real top-quality products.  As a result, McCoy according to some is the source of the term “the Real McCoy”.  Other origins pre date this suggestion but few suit it as well.

However, Prohibition became increasingly unpopular during the Great Depression. The repeal movement ironically was started by a wealthy female Republican, Pauline Sabin,. The Repeal of Prohibition in the United States was accomplished with the passage of the 21st Amendment to the United States Constitution on December 5, 1933.   Perhaps we should raise a glass on this date!